RoCE and InfiniBand: Which should I choose?

The IBTA wrapped up the four part fall Webinar Series in December, and if you didn’t have the opportunity to attend these events live, there is a recorded version available on the IBTA’s website.  In the webinar series, we suggested the idea that it makes sense to take a fresh look at I/O in light of recent developments in I/O and data center architecture. We took a high level look at two RDMA technologies which were InfiniBand and a relative new comer called RoCE – RDMA over Converged Ethernet .

RDMA is an interesting network  technology that has been dominant in the HPC marketplace for quite a while and is now finding increasing application in modern commercial data centers, especially in performance sensitive environments or environments that depend on an agile, cost constrained approach to computing, for example almost any form of cloud computing.  So it’s no surprise that several questions arose during the webinar series about the differences between a “native” InfiniBand RDMA fabric and one based on RoCE.

In a nutshell, the questions boiled down to this:  What can InfiniBand do that RoCE cannot?  If I start down the path of deploying RoCE, why not simply stick with it, or should I plan to migrate to IB?”

As a quick review, RoCE is a new technology that is best thought of as a network that delivers many of the advantages of RDMA, such as lower latency or improved CPU utilization, but using a Ethernet switched fabric instead of InfiniBand adapters and switches.  This is illustrated in the diagram below.  Conceptually, RoCE is simple enough, but there is a subtlety that is easy to overlook.  Many of us, when we think of Ethernet, naturally envision the complete IP architecture consisting of TCP, IP and Ethernet.  But the truth is that RoCE bears no relationship to traditional TCP/IP/Ethernet, even though it uses an Ethernet layer.  The diagram also compares the two RDMA technologies to traditional TCP/IP/Ethernet.   As the drawing makes clear, RoCE and InfiniBand are sibling technologies, but are only distant cousins to TCP/IP/Ethernet.   Indeed, RoCE’s heritage is found in the basic InfiniBand architecture and is fully supported by the open source software stacks provided by the Open Fabrics Alliance.  So if it’s possible to use Ethernet and still harvest the benefits of RDMA, what’s to choose between the two?   Naturally, there are trade-offs to be made. 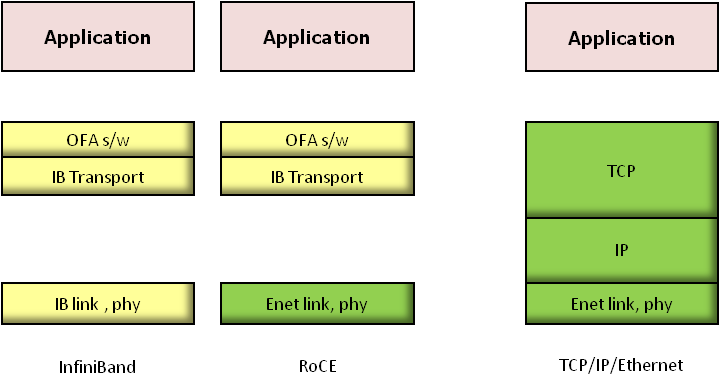 During the webinar we presented the following chart as a way to illustrate some of the trade-offs that one might encounter in choosing an I/O architecture.  The first column shows a pure Ethernet approach, as is common in most data centers today.  In this scenario, the data center rides the wave of improvements in Ethernet speeds.  Naturally, using traditional TCP/IP/Ethernet, you don’t get any of the RDMA advantages.   For this blog, our interest is mainly in the middle and right hand columns which focus on the two alternate implementations of RDMA technology. 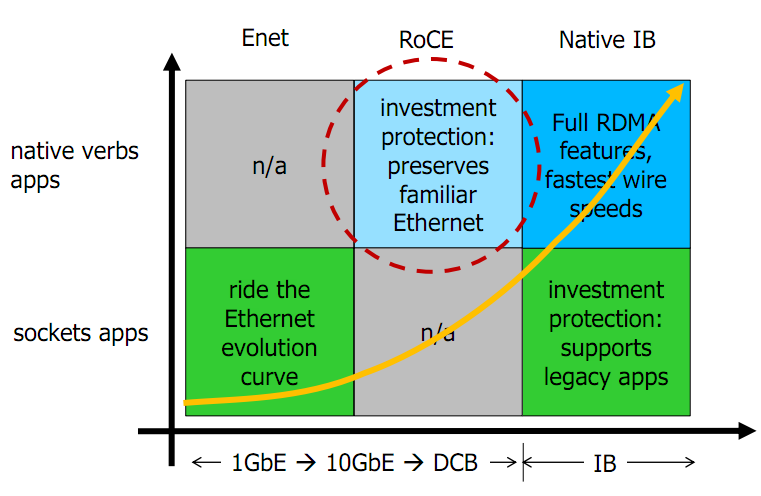 From the application perspective both RoCE and native InfiniBand present the same API and provide about the same sets of services.  So what are the differences between them?  They really break down into four distinct areas.

As we pointed out in the webinars, there are many practical routes to follow on the path to an RDMA fabric.  In some environments, it is entirely likely that RoCE will be the ultimate destination, providing many of the benefits of RDMA technology while preserving major investments in existing Ethernet.  In some other cases, RoCE presents a great opportunity to become familiar with RDMA on the way toward implementing the highest performance solution based on InfiniBand.  Either way, it makes sense to understand some of these key differences in order to make the best decision going forward.
If you didn’t get a chance to attend any of the webinars or missed one of the parts, be sure to check out the recording here on the IBTA website.  Or, if you have any lingering questions about the webinars or InfiniBand and RoCE, email me at pgrun@systemfabricworks.com.