The week of Supercomputing went by quickly and resulted in many interesting discussions around supercomputing and its role in both HPC environments and enterprise data centers. Now that we’re back to work, we’d like to reflect back on the successful supercomputing event. The conference this year saw a huge diversity of attendees from various countries, with major participation from top universities, which seemed to be on the leading edge of Remote Direct Memory Access (RDMA) and InfiniBand deployments.

Overall, we saw InfiniBand and Open Fabrics technologies continue their strong presence at the conference. InfiniBand dominated the Top500 list and is still the #1 interconnect of choice for the world’s fastest supercomputers. The Top500 list also demonstrated that InfiniBand is leading the way to efficient computing, which not only benefits high performance computing, but enterprise data center environments as well.

We also engaged in several discussions around RDMA. Attendees, analysts specifically, were interested in new products using RDMA over Converged Ethernet (RoCE) and their availability, and were impressed that Microsoft Server 2012 natively supports all three RDMA transports, including InfiniBand and RoCE. Another interesting development is InfiniBand customer Microsoft Windows Azure, and their increased efficiency placing them at 165 on the Top500 list. 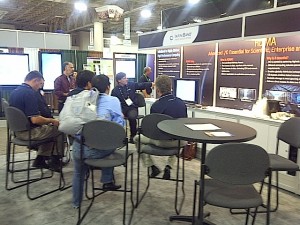 IBTA’s release of the new InfiniBand Architecture Specification 1.3 generated a lot of buzz among attendees, press and analysts. IBTA’s Electro-Mechanical Working Group Chair, Alan Benner, was one of our experts at the booth and drew a large crowd of people interested in the InfiniBand roadmap and his projections around the availability of the next specification, which is expected to include EDR and become available in draft form in April 2013.

SC12 provides a great opportunity those in high performance computing to connect in person and engage in discussions around hot industry topics; this year was focused on Software Defined Networking (SDN), OpenSM, and the pioneering efforts by both IBTA and OFA. We enjoyed conversations with exhibitors and attendees that visited our booth and a special thank you to all of those RDMA experts who participated in our booth session: Bill Boas, Cray; Katharine Schmidtke, Finisar; Alan Brenner, IBM; Todd Wilde, Mellanox; Rupert Dance, Software Forge; Kevin Moran, System Fabric Works; and Josh Simons, VMware.