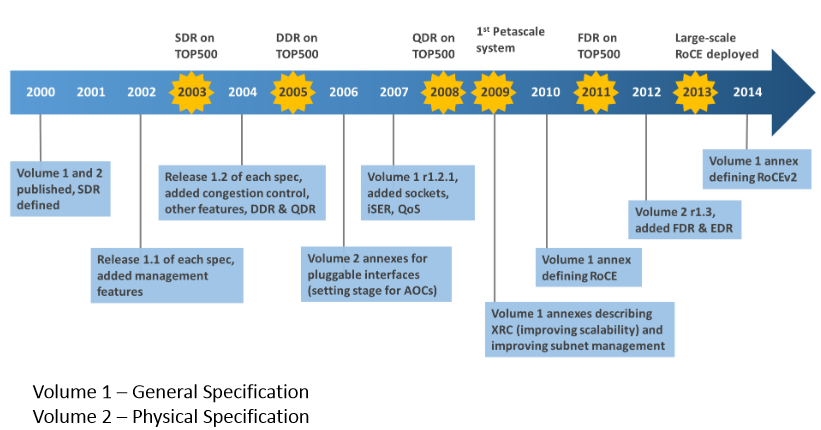 On March 10, 2015, IBTA announced the availability of Release 1.3 of Volume 1 of the InfiniBand Architecture Specification and it’s creating a lot of buzz in the industry. IBTA members recognized that as compute clusters and data centers grew larger and more complex, the network equipment architecture would have difficulty keeping pace with the need for more processing power. With that in mind, the new release included improvements to scalability and management for both high performance computing and enterprise data centers.
Here’s a snap shot of what industry experts and media have said about the new specification:

“It’s worth keeping up with [InfiniBand], as it clearly shows where the broader networking market is capable of going… Maybe geeky stuff, but it allows [InfiniBand] to keep up with “exascales” of data and lead the way large scale-out computer networking gets done. This is particularly important as the 1000 node clusters of today grow towards the 10,000 node clusters of tomorrow.” – Mike Matchett, Taneja Group, Inc.

“Indeed, a rising tide lifts all boats, and the InfiniBand community does not intend to get caught in the shallows of the Big Data surge. The InfiniBand Trade Association recently issued Release 1.3 of Volume I of the format’s reference architecture, designed to incorporate increased scalability, efficiency, availability and other functions that are becoming central to modern data infrastructure.” – Arthur Cole, Enterprise Networking Planet

“The InifiniBand Trade Association (IBTA) hopes to ward off the risk of an Ethernet invasion in the ranks of HPC users with a renewed focus on manageability and visibility. Such features have just appeared in release 1.3 of the Volume 1 standard. The IBTA’s Bill Lee told The Register that as HPC clusters grow, ‘you want to be able to see every level of switch interconnect, so you can identify choke-points and work around them.'” – Richard Chirgwin, The Register