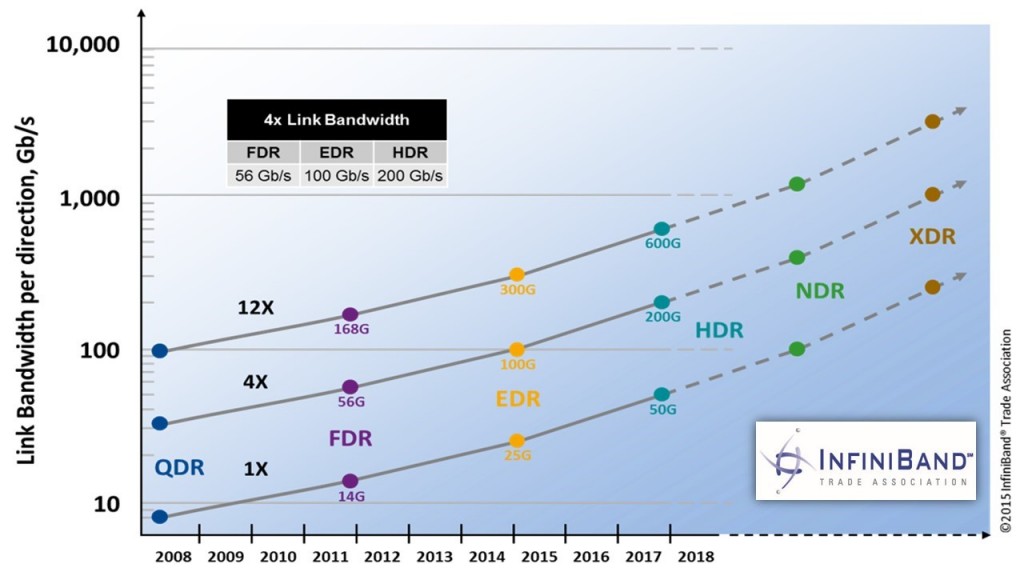 (Editor’s Note: The InfiniBand Roadmap has since been updated.)

Defining the InfiniBand ecosystem to accommodate future performance increases is similar to city planners preparing for urban growth. Both require a collaborative effort between experts and the community for whom they serve.
The High Performance Computing (HPC) community continues to call for faster interconnects to transfer massive amounts of data between its servers and clusters. Today, the industry’s fastest supercomputers are processing data in petaflops and experts expect that they will reach Exascale computing by 2025.

IBTA’s working groups are always looking ahead to meet the HPC community’s future performance demands. We are constantly updating the InfiniBand Roadmap, a visual representation of InfiniBand speed increases, to keep our work in line with expected industry trends and systems-level performance gains.

The roadmap itself is dotted by data rates, which are defined by transfer speeds and release dates. Each data rate has a designated moniker and is measured in three ways; 1x, 4x and 12x. The number refers to the amount of lanes per port with each additional lane allowing for greater bandwidth.

The evolution of InfiniBand can be easily tracked by its data rates as demonstrated in the table above. A typical server or storage interconnect uses 4x links or 4 lanes per port. However, clusters and supercomputers can leverage 12x link bandwidth interconnects for even greater performance. Looking ahead, we expect to see a number of technical advances as the race to Exascale heats up.

As the roadmap demonstrates, planning for future data rates starts years in advance of their expected availability. In the latest edition, you will find two data rates scheduled beyond HDR – NDR and the newly christened XDR. Stayed tuned as the IBTA specifies NDR and XDR’s release dates and bandwidths.