The HPC Advisory Council, together with ISC’11, showcased the world’s first demonstration of FDR 56Gb/s InfiniBand in Hamburg, Germany, June 20-22. The HPC Advisory Council is hosting and organizing new technology demonstrations at leading HPC conferences around the world to highlight new solutions which will influence future HPC systems in term of performance, scalability and utilization.

The 56Gb/s InfiniBand demonstration connected participating exhibitors on the ISC’11 showroom floor as part of the HPC Advisory Council ISCnet network. The ISCnet network provided organizations with fast interconnect connectivity between their booths.

The FDR InfiniBand network included dedicated and distributed clusters, as well as a Lustre-based storage system. Multiple applications were demonstrated, including high-speed visualization applications using car models courtesy of Peugeot Citroën.
The installation of the fiber cables (we used 20 and 50 meter cables) was completed a few days before the show opened, and we placed the cables on the floor, protecting them with wooden bridges. The clusters, Lustre and application setup was done the day before and everything ran perfectly.

You can see the network architecture of the ISCnet FDR InfiniBand demo below. We have combined both MPI traffic and storage traffic (Lustre) on the same fabric, utilizing the new bandwidth capabilities to provide a high performance, consolidated fabric for the high speed rendering and visualization application demonstration. 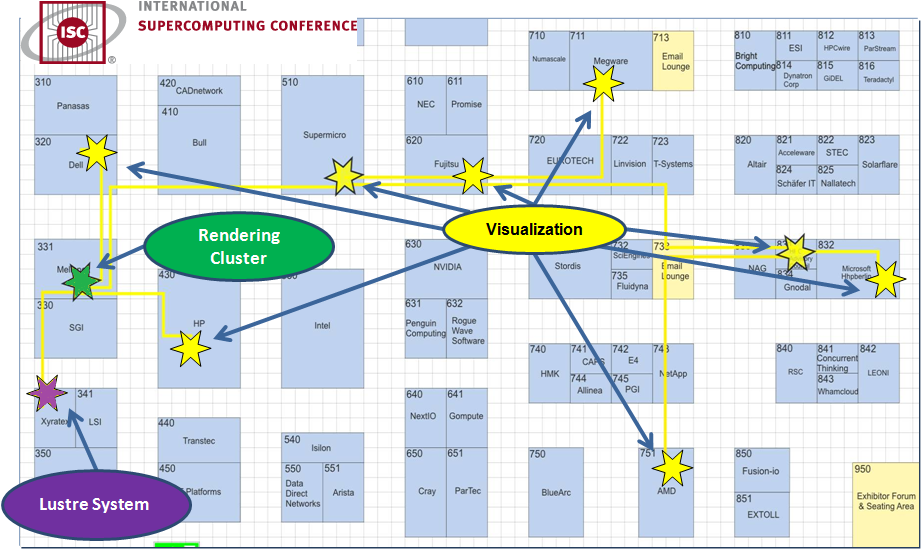 The following HPC Council member organizations contributed to the FDR 56Gb/s InfiniBand demo and I would like to personally thank each of them: AMD, Corning Cable Systems, Dell, Fujitsu, HP, MEGWARE, Mellanox Technologies, Microsoft, OFS, Scalable Graphics, Supermicro and Xyratex.

Regards,
Gilad Shainer
Member of the IBTA and chairman of the HPC Advisory Council